Happy April 15th! In the last post, we discussed a problem related to health insurance subsidies under the Affordable Care Act (ACA) caused by the legislation’s failure to address the impact of significant income fluctuations throughout the year. An approach that could deal with this takes a page from “accelerated” sales commission plans, where commission rates increase as sales volume increases.

To see how this might work, consider this simplified ACA subsidy example, shown in both table and graph form: 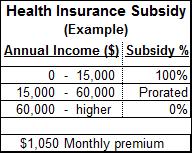 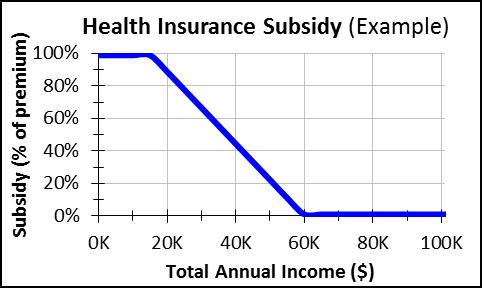 Under this approach, let’s look at Arthur, who starts the year with very little income, but finds a well-paying job in the second half of the year, and even gets a small yearend bonus:

In the “Y-t-D Calculations” columns, we estimate the subsidy at each month by annualizing the individual’s year-to-date income. Then, as shown in the “Actual Premium Pmts.” columns, the actual subsidy in each month is the difference between the estimated year-to-date subsidy (shown in the “YTD $$ Sub.” column) and the total subsidy received in all prior months. Note that as Arthur’s income picture brightens, his monthly bill includes an additional amount to pay back the unearned subsidy gradually. That gradual payback (a) is based on a fair assessment of the income, (b) occurs gradually as income rises, and (c) beats the ugly surprise of a bill for a couple of thousand dollars much later, at tax filing time.

This approach also applies to those with income moving in the opposite direction. In the example below, Betty earns the same amount of money for the whole year as Arthur – $60,000 – but with an exactly reversed monthly income pattern:

In this example, Betty still has a $210 refund to receive at tax time, but both Arthur and Betty receive the same total subsidy of $3,710, and the amount that needs to be settled with the filing of a tax return is relatively small or even zero. (Whether anything is left over to pay or refund at tax time will depend on how dramatically income fluctuated during the year.)

This approach is fair, humane, and works for virtually all distributions of income throughout the year. And, perhaps surprisingly, it’s based on sound incentive compensation practices.


R.I.P. Hans Rosling, Explainer Extraordinaire
Your Health Insurance: A Hidden Premium Increase
Wells Fargo Is Trying to Fix the Wrong Problem
What Does a Bad Hire REALLY Cost?
At Last! A Guest Blog! How Do Vegetarians Get Their Protein?