Again with the Most Useful Graph Ever, This Time for MBOs


Last week, we looked at a simple, handwritten graph that’s a great example of what graphs and data visualization are really for – to help people get a sense of trends, patterns, and what behavioral consequences might be. Now let’s use that same approach to understand a typical management-by-objective (MBO) bonus plan for line managers and key employees.

Here’s the MBO bonus plan in place at one company when I joined them as CFO: 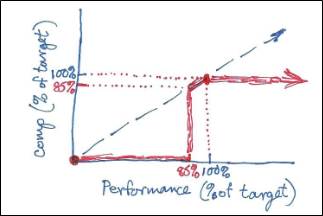 With this graph in hand, it’s easy to see that:

As a result, almost all employees’ MBO scores were tightly bunched in the 85%-100% range, making the scores nearly meaningless for ranking employees and identifying top performers. Moreover, all but the worst performers ended up getting paid at least 85% of their target bonus. So we made the following changes to the plan: 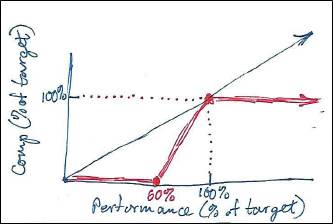 Now that nowhere in the possible scoring range did a 1% reduction in MBO score have a dire financial consequence, managers were more willing to give MBO scores across a wide range, making scoring comparisons more meaningful. Moreover, the company-wide total payout ended up being less, since payouts could range from 0% to 100% rather than the 85%-100% payout that went to all but the worst performers.