The U.S. House of Reps, and Data Visualization (#1)

At last week’s terrific Association for Financial Professionals (AFP) national conference, there was much discussion of “data visualization,” a major information-presentation buzzword these days. Last week’s U.S. elections seem to provoke the same urges to barrage us with graphics. But do all these beautiful pictures really get us anywhere?

These thoughts were brought home by a Washington Post piece attempting to form conclusions about how the U.S. president’s party has fared in the House of Representatives in mid-term elections since 1952 (click here to see it). Unfortunately, The Post’s effort is nothing more than a pile of data fragments separated by slick visuals and lots of white space, which combine to rob the reader of any sense of the scale of the changes or of any discernible trend or pattern.

So I decided to take my own data visualization stab at the political party composition of the House: 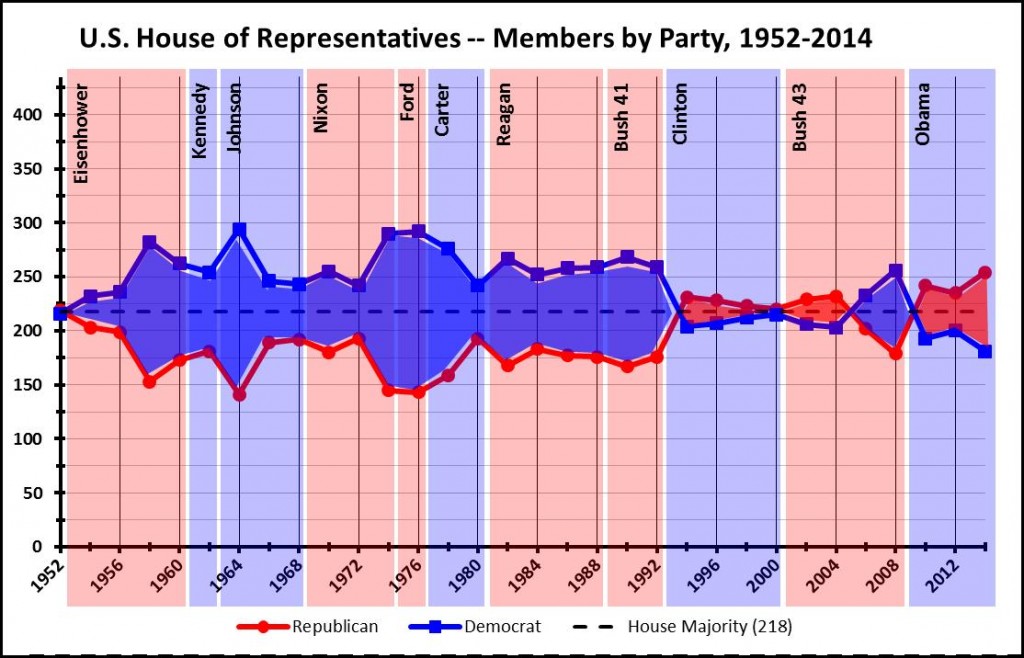 I consider this a big improvement. In a single image, the reader can see the House’s composition over the entire 1952-2014 period (31 election cycles), and at the same time get a sense of scale, trends, and patterns. The following characteristics help:

Creating a graph like this is really time-consuming. The three hours it took me to create this visual required every milligram of the OCD in my personality. And that begs the question: Is the effort worth it? Does turning data into beautiful, elegant graphics actually result in a better-informed audience? Is it the most efficient, effective way to get your point across? Did you learn anything that you didn’t already know?

I believe the answer to the above questions is: sometimes, but not nearly as often as many think. More on this in my next post.