401Ks, IRAs, and the SECOND Miracle of Compound Interest

Last post, we talked about the miracle of compound interest, and how that “miracle” gives you such a strong incentive to start contributing early to 401Ks, IRAs, or any other pension or savings plan. In this post, we’ll talk about another powerful incentive driven by the “miracle” – the fact that in a pension plan your money compounds at pre-tax rather than after-tax rates. For most of you, this will make an even bigger difference.

With 401Ks and IRAs, you get two tax breaks: (1) you don’t pay taxes on income you contribute to a pension plan, and (2) you don’t pay taxes on your investment returns no matter how frequently you buy and sell. In exchange, when you reach retirement age and do start giving yourself distributions from your pension plan, the entire amount you withdraw is subject to income taxes. But you still come out way, way ahead.

Let’s suppose you are planning to save $1,000/year, from age 25 through 65, and your combined (federal, state, etc.) is 35%. (If you can only save, say, $500/year instead of $1,000, don’t worry – the arithmetic still works.) You invest what’s left of your $1,000 after you’ve paid your taxes, and your investment return is 8%. (That’s been the average for the U.S. stock market for the last several decades, but please note that inflation has averaged above 3%, so the “real return” has averaged closer to 5%.) Just to keep it simple, you cash in your entire investment at age 65. (In real life, you’d withdraw it slowly over your retirement years, but that doesn’t change any of my logic.) 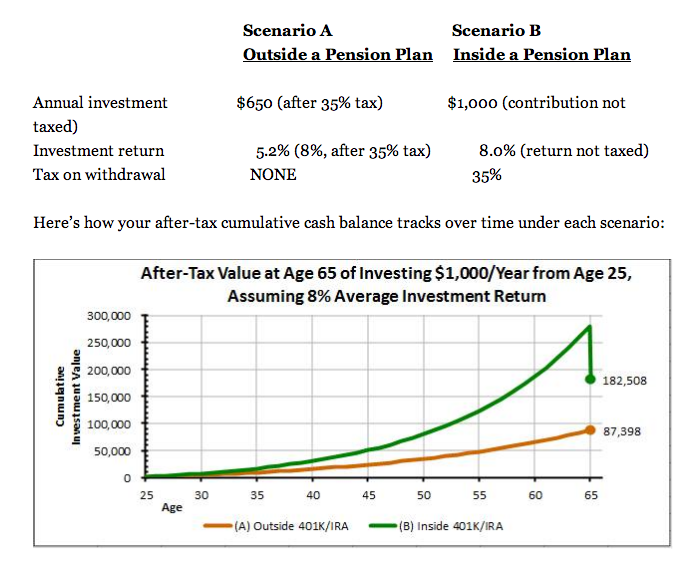 Note that there’s a sudden drop at age 65 under Scenario B, when you finally pay your taxes. But even with that tax hit, participating in a 401K or an IRA has given you a nest egg more than twice as large ($182K vs $87K) as you’d have if you’d just invested the money the ordinary way. From another perspective, it’s even more dramatic: your $40,000 contribution ($1,000/year for 40 years) has returned you $142,000 under Scenario B, roughly triple the $47,000 in Scenario A returns. And that’s before we even consider what you could do with the $350/year you saved in income taxes.

All of this combines to confirm an assertion I’ve heard many times: 401Ks and IRAs are the best deal the U.S. government – or any other government, for that matter – has ever given the average taxpayer.