Tax "Rates" and the Meaning of Words

In the current debate about the U.S. federal government’s fiscal predicament, there is much rhetoric, from both sides of the aisle, about the need to “rationalize” and “simplify” the federal income tax code, and lower tax rates in the process. The real issue, of course, is the deficit, and the only way to reduce a deficit is to either spend less or tax more. So how can “lowering tax rates” help solve the problem?

The explanation lies in the difference between published tax rates and effective tax rates. This difference arises from the fact that we pay taxes not on our total income, but on our total income minus credits, itemized and other deductions, and other adjustments. Some of these adjustments are loopholes and breaks for special interests, but most are items we have all gotten used to, like mortgage interest, donations, pension plan contributions, certain healthcare costs, and so on. The complexity of all these items is hard on most taxpayers, and often creates opportunities for abuse, so many legislators are proposing cutting way back on them.

Here’s a very simple example, of a household with total gross income of $80,000 that currently pays taxes at a 20% rate, with deductions and other income reductions totaling $30,000. The proposed “rationalization” of taxes would reduce those deductions to $16,000, but also lower the tax “rate” to 18%. Here’s how the two scenarios would look: 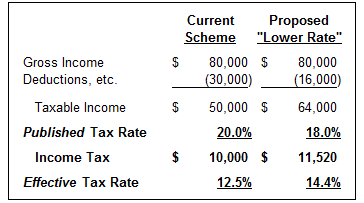 Because this household’s lower tax “rate” under the proposed scheme gets applied to Taxable Income that is $14,000 higher, the income tax bill ends up $1,520 higher. And the effective tax rate – that is, Income Tax divided by its Gross Income, which most of us think of as the way to calculate our “tax rate” – is now 14.4% rather than 12.5%.

“Published Tax Rate,” “Effective Tax Rate,” and “Marginal Tax Rate” – the rate that applies to your next dollar of taxable income when tax rates vary with income level – are all valid uses of the word “rate.” But pay attention to what they’re saying to you – not every reduction in your “tax rate” means you’re going to be paying less taxes.