Please share this blog as a public service with anyone you think will benefit from it. If you’re an executive responsible for employee benefits, share it with your coworkers. The decision about when to start collecting Social Security is a critical one that every American worker faces, and it’s one that really lends itself to a clear presentation of the numbers. If you’re a finance professional or sophisticated financially, this discussion will be pretty basic, but even so I encourage you to think of this as an exercise in quantation.

Clearly, the decision about when to start your benefits hinges on how long you – and your potentially surviving spouse, in some cases – expect to be around. The longer you expect to live, the more it makes sense to hold off starting for a couple of years in order to collect the higher benefit. To understand this in dollars and cents, consider the following table, which shows the total Social Security benefits you would collect, depending on when you choose to start collecting benefits and how long you expect to receive them. (This assumes that your standard benefit is $1,500/month, but this analysis will come out the same at any level of benefits.)

In the earlier years, you come out ahead by taking the money sooner, but at some point the higher monthly benefit begins to outweigh the disadvantage of having started to collect benefits later. In the above table, in the “Age 62” column I’ve shaded the cells where the advantage crosses over, and your total benefits become greater if you had chosen to retire at age 66 instead. I’ve done the same in the “Age 70” column, to show where that benefit crosses over when compared to retiring at age 66.

This is a lot of numbers to absorb, so it’s a situation where a graph can really help. The following graph plots the information in the above table. The thicker black line shows total benefits if you retire at the standard age of 66, and the blue and the green lines show benefits from retiring at ages 62 and 70, respectively. I’ve also added comments to show the crossover points discussed above: 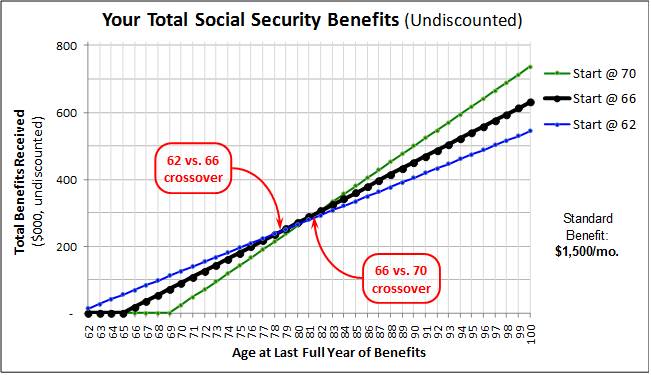 You can now easily see that if you collect Social Security beyond age 78, you come out ahead by waiting until age 66 to start collecting versus starting at age 62. And if you can make it past age 81, starting to collect at age 70 beats both other choices. Considering that the current life expectancies of a 62-year-old man and woman are 83.8 years and 86.3 years, respectively, holding off until age 66 may be a good choice. And ditto for holding off for another four years – the corresponding life expectancies for 66-year-old men and women are 84.8 and 87.0 years, respectively. (If you’re curious, the Social Security website has a life expectancy calculator.)

Now, there is another wrinkle: note that the above numbers are undiscounted, meaning that $1 in the future has the same value as $1 right now. And we all know that when it comes to money, sooner is better than later – if nothing else, money you have now is money you can invest, or money you don’t need to borrow. When we apply discount rates, the analysis changes a little bit. In my next post, we’ll take a look at how much of a change, and some other things to consider.

Please note: Although this analysis is fundamentally sound, there are complexities in the system related to taxation, other earnings, survivor benefits, and other factors. Consult a professional financial advisor to make sure your own decisions take these factors into consideration.


A Great Last-Minute Gift Idea!!!
At Last! A Guest Blog! How Do Vegetarians Get Their Protein?
Marital Infidelity and Data Visualization
Setting the Bar (Graph) Lower... Much Lower
The Social Security Decision: The "Soft Stuff"